FROM PADDOCK TO PLATE

Peel Region producers have become a favourite of Fremantle based chef Kenny McHardy, and he’s on the hunt to uncover more of the regions incredible producers that are, as he says, literally on his doorstep.

From day one, the menu at Fremantle’s Manuka Woodfire Kitchen has been crafted to celebrate fresh, seasonal Western Australian produce. For head chef and owner, Kenny McHardy, the restaurant that he runs with his wife pays homage to the of years of work that’s taken him from his native New Zealand, to the Michelin starred kitchens of Gordon Ramsay and Marcus Wareing in London to the Two Hatted Walters Wine Bar in Melbourne.

Kenny’s passion for seeking out quality ingredients, and getting to know the people behind the produce he cooks, has resulted in a loyal following; so perhaps it’s not such a surprise that he alongside celebrity partner, Channel Seven’s media personality Mark Gibson, took out the 2017 crown winning Buy West Eat Best’s WA Celebrity Signature Dish competition representing the Peel Region.

“When Mark and I started to plan what he wanted to cook with, it made me realise how much is undiscovered in the Peel Region and perhaps even more so, how diverse the region is in term of both produce and landscape,” commented Kenny, with Mark agreeing saying, “I’ve been a regular visitor to the region for many years, both through work and catching up with family who live on Mandurah’s beautiful canals. Taking part in the competition really did reveal for me so much more within the region. I always generally thought of the Peel Region in terms of coast, but the more I found out… that’s one of the reasons we selected beef as the hero ingredient, the further inland you go, the more there is to discover.”

The duo’s winning dish featured slow braised Harvey Beef shin with roasted sweet potatoes and pickled vegetables. The dish was matched with a Malbec from Drakesbrook Fine Wines in Waroona.

For Kenny, he feels he is only just starting to scratch the surface when it comes to the region, “like Mark, my biggest surprise was realising how big the region is. I now don’t just think of it in terms of seafood, I’m now considering dairy, rabbit, pork, craft beer, wine, honey and citrus. I also hear there are crickets!

With Manuka’s menu rewritten multiple times each week, Kenny is looking forward to including further Peel Region producers onto his menu.

CHEF KENNY’S 5 PEEL REGION PRODUCERS YOU MAY NOT KNOW 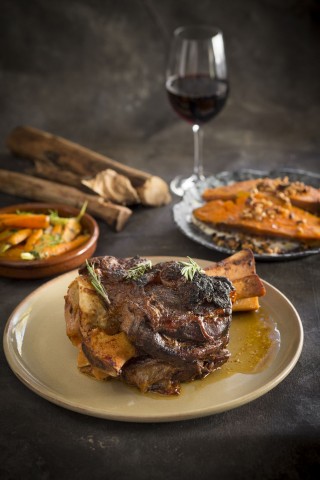 1. Hamlet Pork Is a boutique heritage breed pork producer in Coolup. It’s here Luke and Catherine Hamson raise their very happy pastured Berkshire pigs. Those in the know find their delicious selection of pork products at farmers markets or purchase direct from the farm.
2. Hoots Honey Not just a great name, ethical small scale beekeepers Stephen and Linda Hooton are delivering raw unprocessed honey from their roadside stall in Waroona.
3. Grubs Up Australia After researching the potential of insect production for animal feed and human food in Australia, in 2016 Grubs Up was given the okay to sell crickets to consumers. Look out for their protein powder, cricket dukkha and spices.
4. Decadent C’s Chocolate Factory A true family business based in Barragup, the café is run by Chocolatier and Patisserie Cook Jenny Todd with her husband Neil. Behind the scenes, daughter Natarlie creates incredible custom cakes and Jenny’s sister Estelle ensures the savoury side of the menu is looked after.
5. The Wine Tree Dwellingup isn’t just the home of world-class mountain bike trails and tree top adventure courses, nestled in the heart of Holyoake Valley the Wine Tree Cidery produces small batch fruit wines, ciders and ginger beer.

1. Millbrook Winery The location is stunning, their menu and kitchen garden is incredible and it’s always lovely to catch up with chef Guy Jeffreys’ and his team.
2. Mundella Foods We regularly use Mundella yoghurt in particular across our menus. I love that when you visit, the cows they milk are just in the next paddock or from neighbouring farms.
3. Harvey Beef The hero ingredient in our winning dish. It was remarkable to learn how much beef is farmed and sourced by Harvey Beef from within the region.
4. Mandurah Seafood Damien Bell and his family are inspiring. His company has passed the world’s most rigorous, scientific standard for sustainability to be MSC-certified, so when in season we have his blue swimmer crabs on the menu. The variety of estuarine fish species found in the Peel Inlet-Harvey Estuary such as mullet, whiting, herring and tailor has been warmly welcomed by our customers with many fondly reminiscing about when they went fishing in the region as kids.
5. Serpentine Falls, Serpentine National Park One of the most relaxing locations for us as a family. We love to hike, swim and picnic here. It also has the most lovely play area for the kids. Always a great day out.

We are the official tourism page for Mandurah and the Peel Region, the perfect escape, anytime of the year.


No comments made yet. Be the first to submit a comment